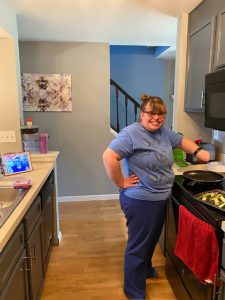 When Missy agreed to receive “tele-habilitation” services through EFR during the COVID-19 pandemic, she wasn’t really sure what to expect. She had been volunteering in her local community with her DSP Blanca and wasn’t sure how things would work out now that the volunteering opportunities were closed down.

Blanca proposed to Missy and her sister Marla a new option of working together over the phone through Facetime, Skype, and other apps that would support their time together. Marla was skeptical, but Missy readily agreed and Blanca and Missy began cooking together with Missy in the kitchen and Blanca on the phone giving her prompts.

Missy orders Hello Fresh meals that are delivered to her home. She and Marla scan the directions for meal preparation to Blanca, who reviews them and then walks Missy through all of the steps. Marla has been blown away by how much Missy’s skills are advancing even faster than when Blanca was physically present. Marla expressed that she can see Missy’s independence improving very quickly and her sister is now “cooking all the time and learning to eat healthier options.”  She’s also lost five pounds in three weeks due to her new meal choices and her new exercise program.

Missy has been walking physically with one DSP, Linda, and then virtually with Blanca. Missy takes her phone with her on walks and has Blanca with her via Facetime. Together, they walk around the half-circle where Missy lives. Marla has again been shocked by what her sister has accomplished, as this is something she never thought Missy would do. Together, Missy and Blanca navigate the route and chat along the way – all virtually!

They’ve also begun doing yoga together, following a YouTube video together while each set up in their own homes. On Wednesdays, they have joined an online Zumba group with everyone in the group on the screen following along. Marla said the group has been awesome and very accepting of everyone.

Missy and Marla are both very happy with how things are progressing and are considering keeping online activities up, at least once a week, even after the stay-at-home orders end and in-person activities are able to be safely resumed. They are glad they took Blanca up on her offer to participate in tele-habilitation as Missy’s confidence and independence are both growing in leaps and bounds. They accepted the challenge head-on and made it work for all of them.